Regarded as one of the most stunning squares in Italy, the Piazza delle Erbe is a testament to the long-running, impressive history of Verona. It is home to an eclectic melange of monuments and buildings from various periods. From the very beginning, the square has been the centre of Verona’s political and economic life. It began as the Roman forum, translated as the Market Square, or more literally, square of herbs, the Piazza delle Erbe has been the commercial and administrative nucleus of the city for centuries.

A must-see for tourists in Verona, it is the oldest of the city’s squares and is lined with cafés, restaurants, shops, and a variety of beautiful ancient buildings. Standing in the square, you can feel a bustling sense of what daily life has been like in Verona throughout history. 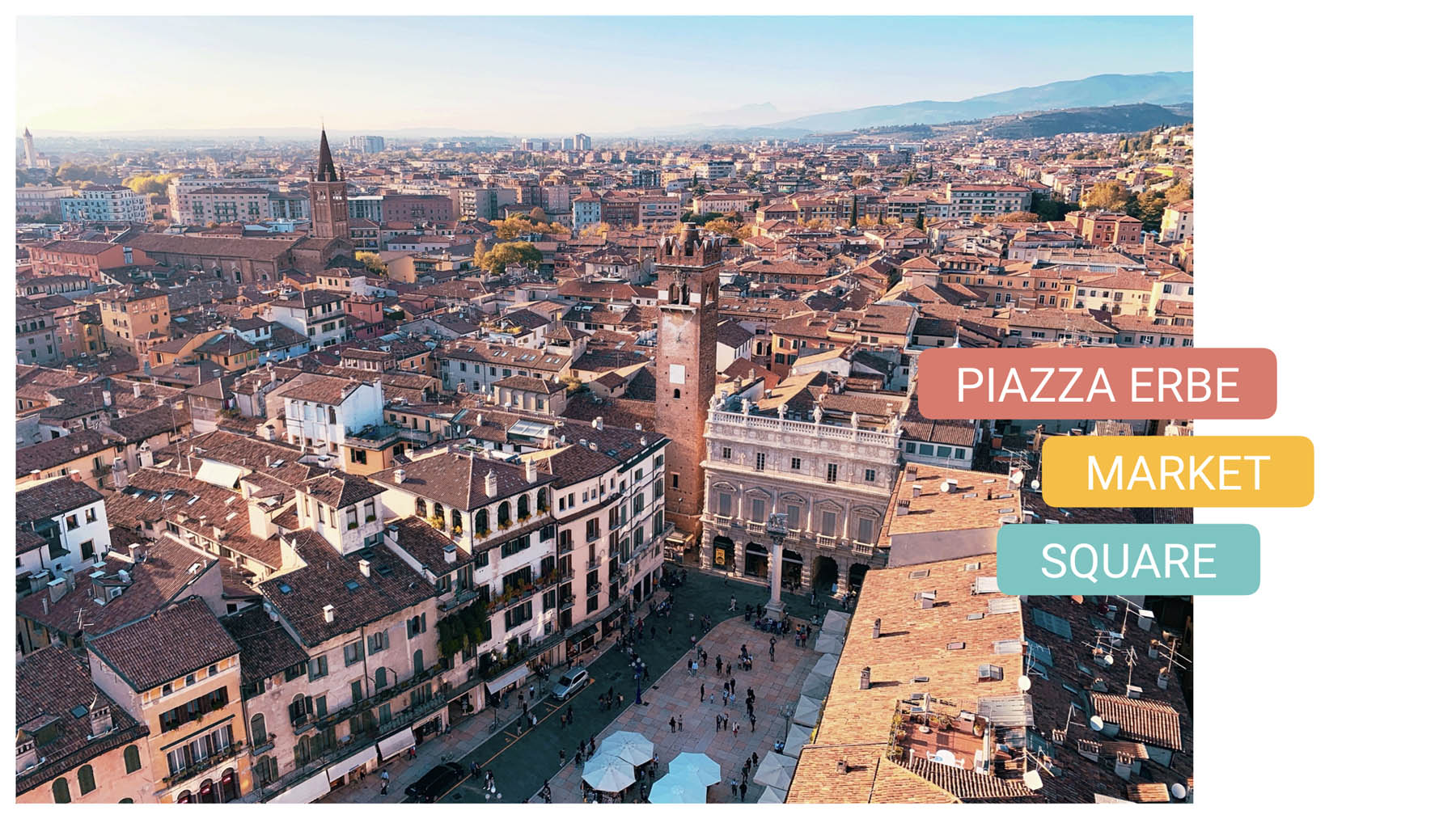 What To See in the Square

The confusing mix of attractions in Piazza delle Erbe commands appreciation from visitors for its picturesque setting and lively historical consciousness. Check out some of the best things to see in Piazza delle Erbe, Verona, from this list of the key monuments.

The Maffei Palace is a baroque building from the 17th century decorated with statues of the Greek mythological characters. This majestic, historic palace was built for the Maffei family who owned the area at the time. Admiring the palace from the square, visitors can see the various, detailed statues of Hercules, Jupiter, Venus, Mercury, Apollo, and Minerva. Palazzo Maffei hosts a contemporary art museum.

Facing the palace is a white, marble column with St Mark’s lion atop. It is a symbol of the Republic of Venice.

Next to the palace, visitors will find the Gardello Tower. The tower was restored by Cansignorio della Scala in 1363 and raised to its current height of 44 metres. He had the tower made into one of the first striking towers in the world, with a bell that is now on display at the Castelvecchio Museum. 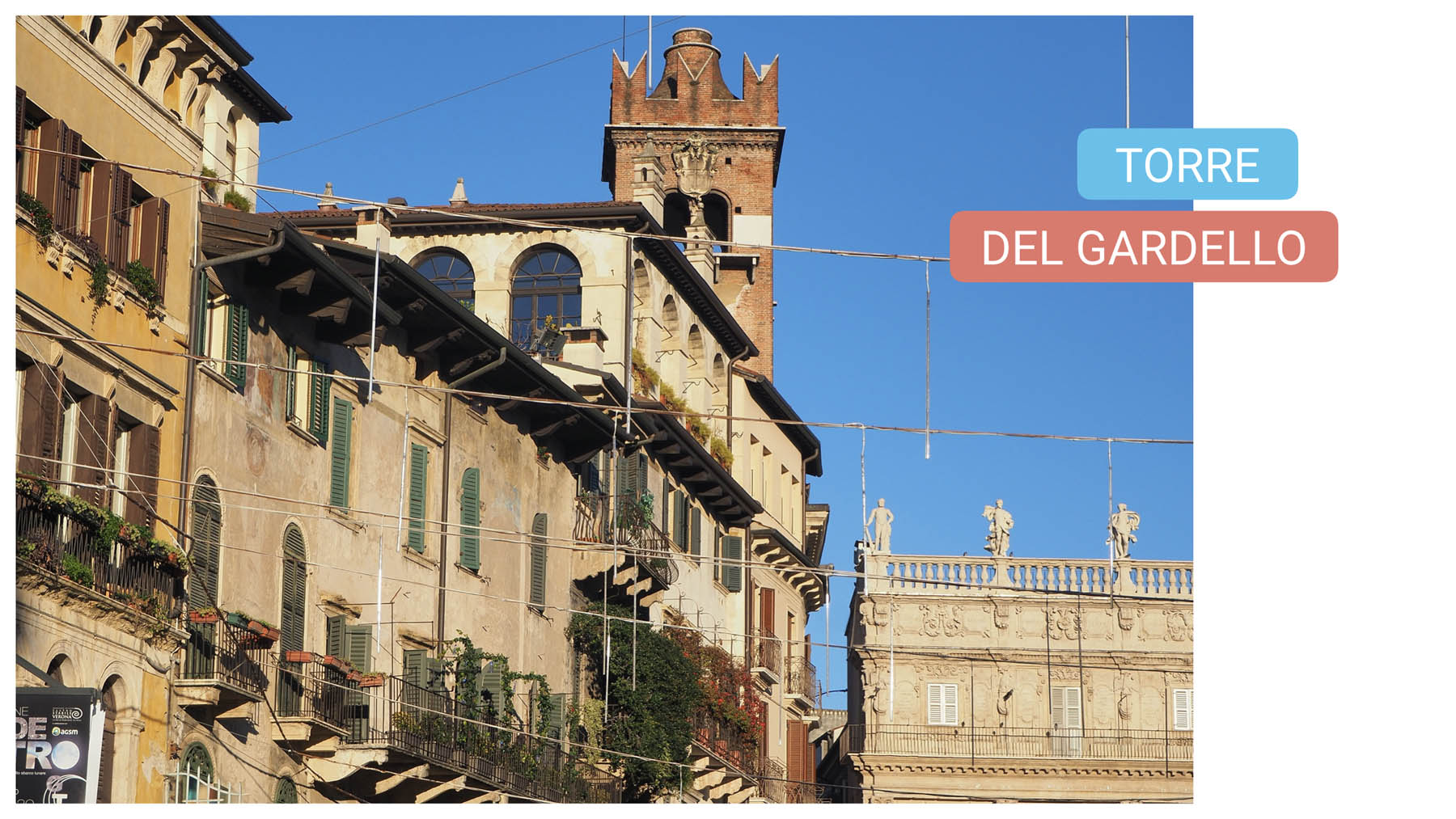 On the south side of the square, we find the Domus Mercatorum or Casa dei Mercanti, a merchant’s guild that was erected in stone in 1301 to replace a wooden original from around a century before. The crenellated building has since been restored various times and is currently occupied by the Banca Populare di Verona.

A symbol of the city, the Madonna fountain in the centre of the square was constructed in 1368, commissioned by Cansignorio della Scala. An ancient Roman sculpture dating back to 380 AD was placed on top and is the reason for its namesake. The Madonna statue is another example of the historic homogenization represented in the Piazza delle Erbe. The main sculpture of the Lady of Verona is Roman, however the arms and head were replaced in the medieval period. The fountain is built with red verona marble which was used in the Roman thermal baths. 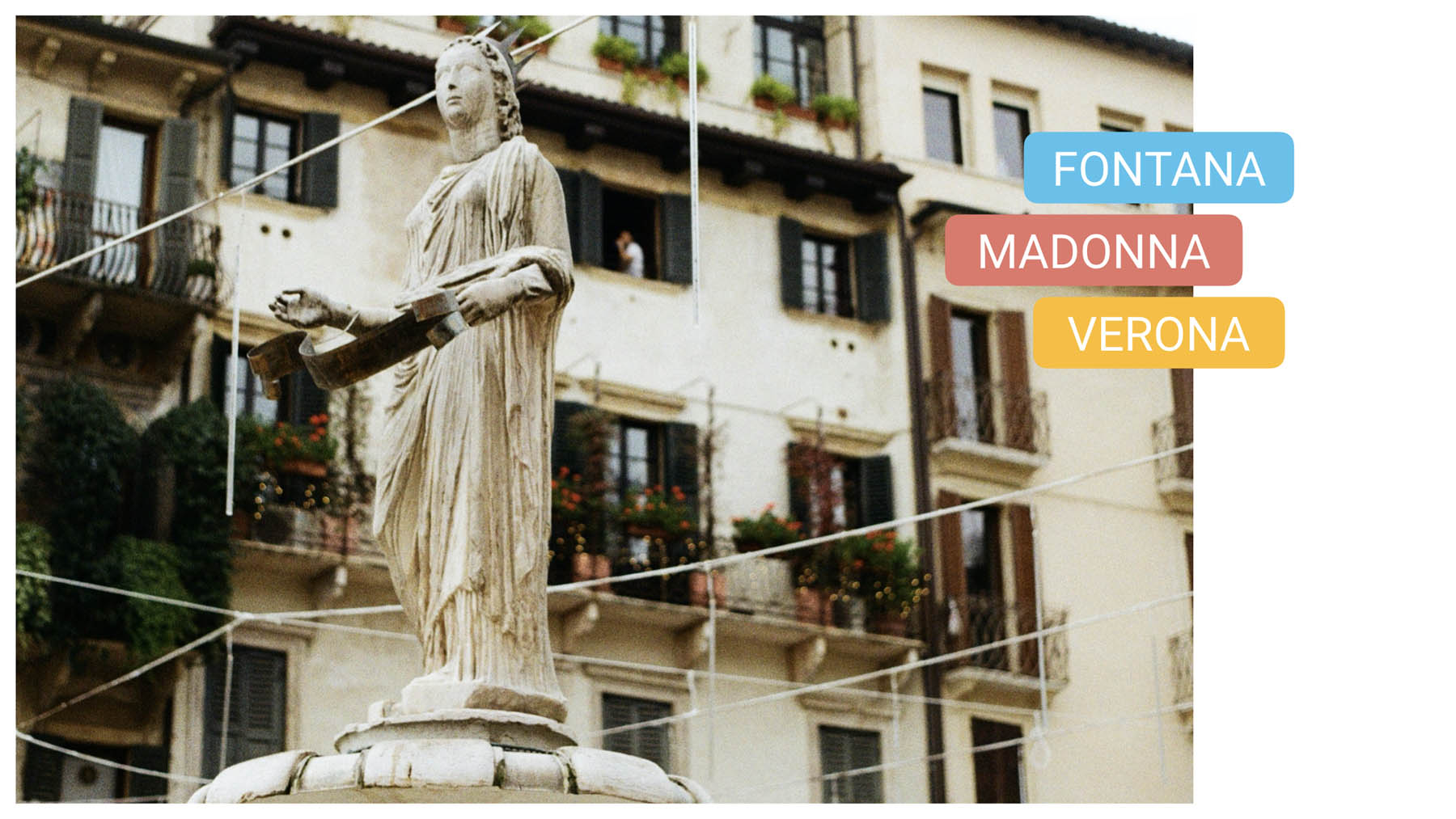 Overlooking the city of Verona, standing at 84 metres, is the Lamberti Tower. Visitors can climb up the 368 steps or alternatively take a lift that equally lets you admire the architectural magnificence. It is connected to the Palazzo della Ragione, the City Hall. The tower contains medieval bells installed in 1295. It later collapsed after a lightning strike and was reconstructed and raised between 1448 and 1463. Centuries later, in the 1790s, a clock was added to the tower face, to replace the clock on the Torre Gardello which had stopped working.

The two bells served specific functions. The first, named Marangona, signals fire, working times, and the hours of the day. The second, called Rengo, was used to call the population to arms or invoke councils.

The tower allows tourists a spectacular view of the city during the day, and in the evening, becomes a rooftop terrace for exquisite events. 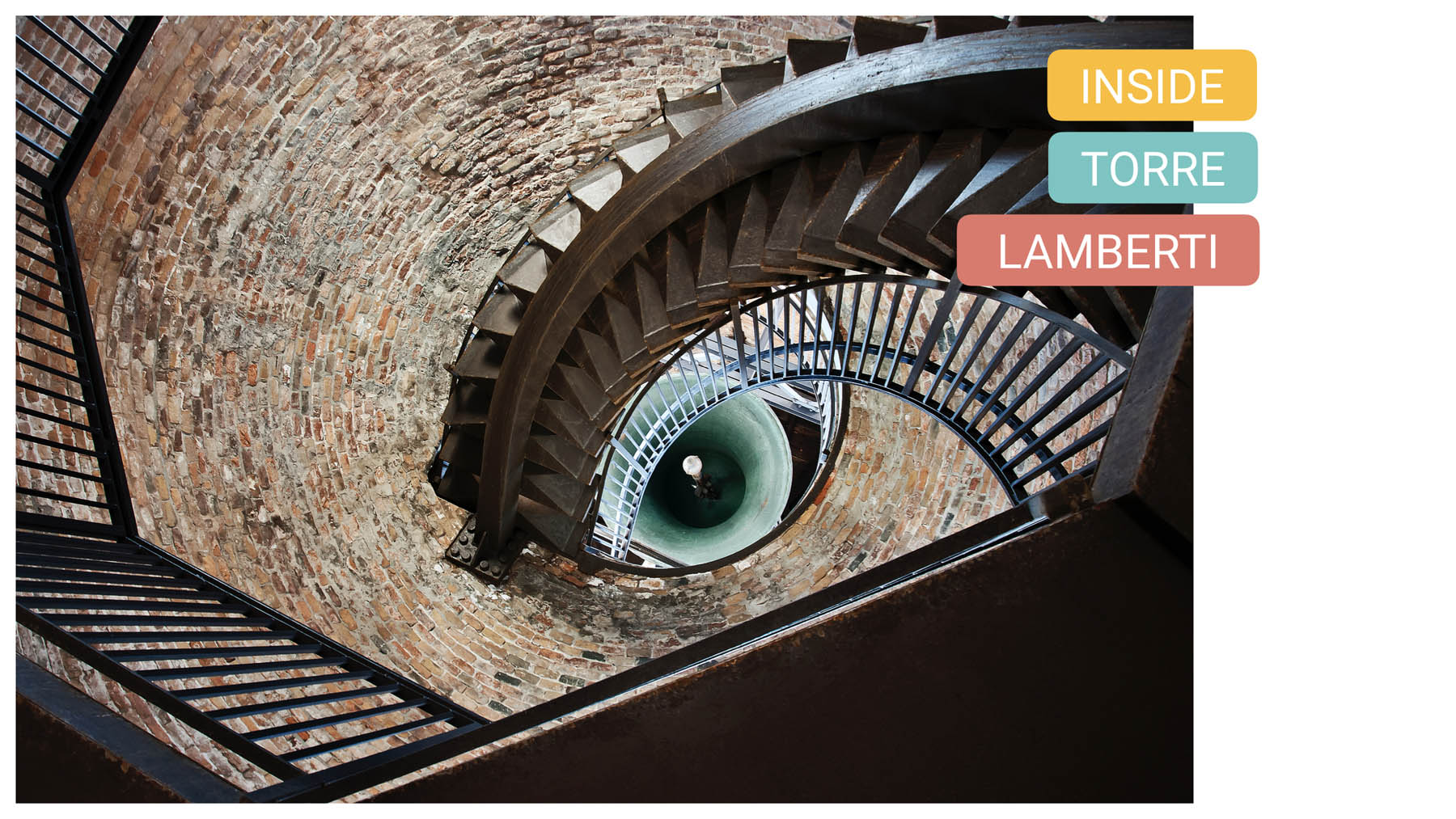 The northeastern part of the square is home to the Mazzanti houses and Domus Nova, later known as the Casa dei Giudici (judge’s hall). These houses initially belonged to the Scala family, at the time an influential affluent family of the area, before becoming lords of Verona. They were later sold to the Mazzanti family who were wealthy merchants.

What is most alluring about these medieval houses are the colourful frescos on the exterior walls facing the square. They represent ignorance, prudence, envy, providence, and the fight between giants. These frescos contributed to the nickname that was bestowed upon Verona at the time of Urbs Picta (painted city). During the renaissance, it was common for nobility to paint their residences. 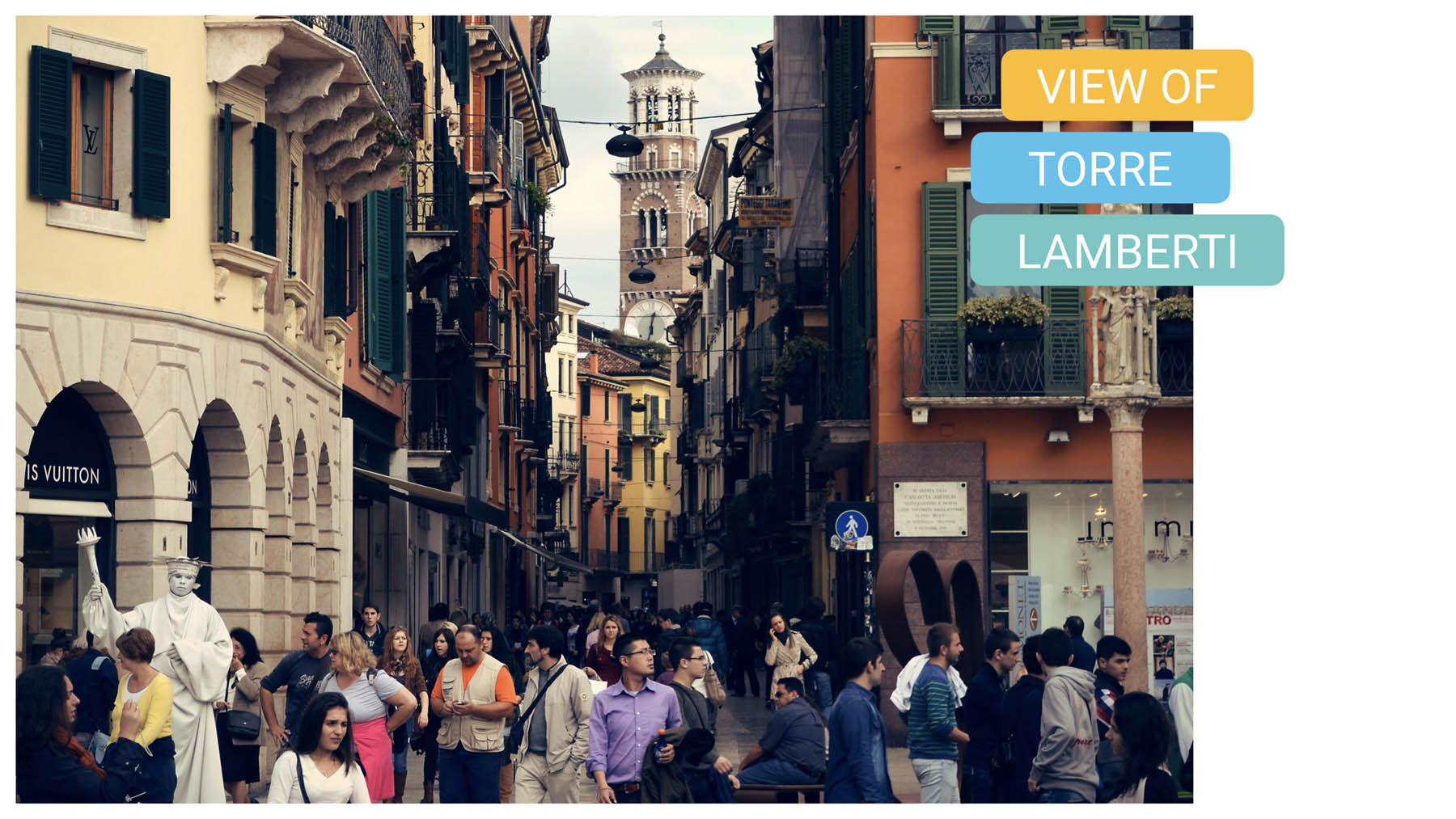 Among other curious and intriguing parts of the square, one of the most unexpected sights is that of the Arco della Costa. Not because of the arch itself but due to what is hanging from it: a whale rib. No one exactly knows how the bone arrived or when but it is thought that it has been hanging there since the 1700s, but possibly even longer. The legend that is told about the rib bone is that it will fall on the first innocent or just person who walks beneath it. Together with hundreds of daily tourists and locals, both kings and popes have visited and yet it has not fallen. Ironically, the walkway on the arch was initially used for judges and magistrates to pass from city hall to their living quarters without having to go through the square with the common people.

This arch leads from the fascinating Piazza delle Erbe to Piazza dei Signori, another of Verona’s captivating squares.